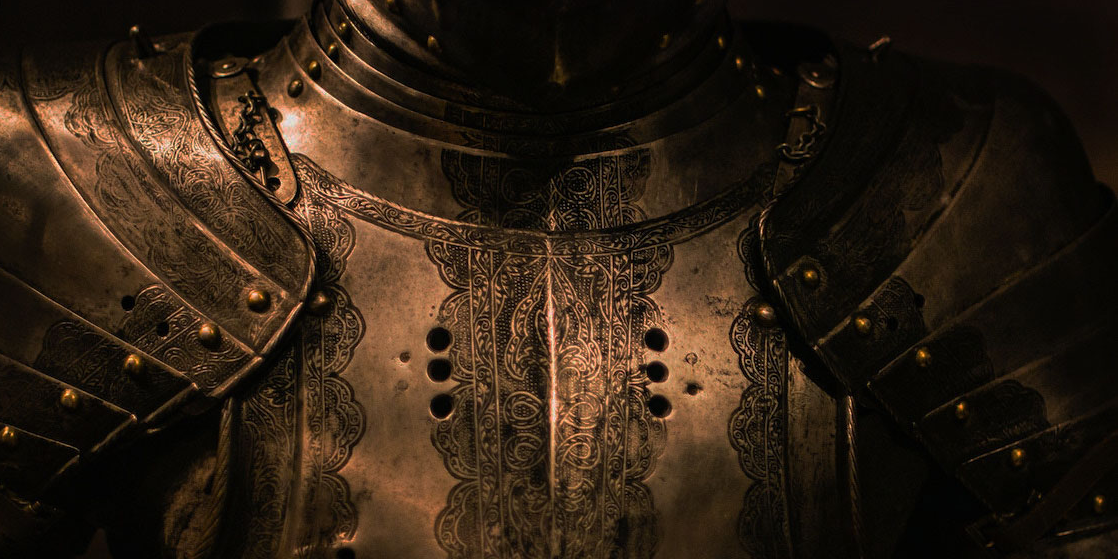 Kasten uses and helps develop kopia, a fast and secure open-source tool to manage backups. Today, kopia can work standalone on data sets ranging from small laptops to large servers and comes with a variety of out-of-the-box options for encryption, deduplication, and compression. It is also a lock-free system that, unlike other similar tools, allows for concurrent multi-client operations including garbage collection.

Kopia's true value really starts to emerge when we pair it with Kubernetes and K10, Kasten’s Kubernetes backup platform:

Kopia’s development has accelerated in 2020 and is quickly approaching 1.0. While a number of new features have shown up within the tool, this post will concentrate on the performance improvements made over the last few months. To do that, we will compare v0.4.0 (January, 2020), v0.5.2 (March, 2020), and v0.6.0-rc1 (July, 2020). We will additionally also compare it to restic, another popular open-source backup tool. All binaries were downloaded from GitHub. With the exception of  the s2-standard compression scheme being enabled with kopia, the default options were used for all tools.

We measured how long it took to backup data using the above systems on an AWS EC2 m5dn.12xlarge VM (48 vCPUs, 192GB RAM, 2x900 NVMe SSD, 12 Gbps network bandwidth) running Ubuntu 18.04. On the VM, we generated two datasets that were stored on one of the local NVMe devices:

All systems pushed data to an AWS S3 bucket in the same region as the EC2 VM. We repeated each experiment three times and the results presented below are the average of three runs. For each experiment, we captured a number of metrics and report both the total experiment runtime and the final size of the data stored in S3 in the below graphs. 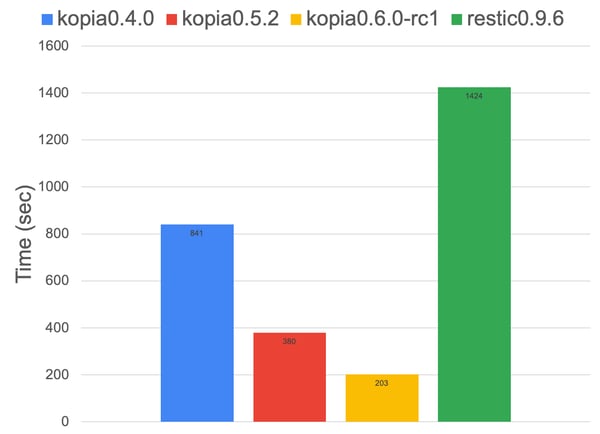 As can be seen in the above results, kopia’s performance has improved significantly over the last few releases. The time taken to backup 200GiB of data has been reduced from ~840 seconds to ~200! For just a single process, this translates to an effective processing bandwidth of 1 GiB/second and an upload bandwidth utilization of 3.5 Gbps. The majority of these performance gains can be attributed to a more efficient memory allocation algorithm, improved parallelization and other data pipeline improvements. 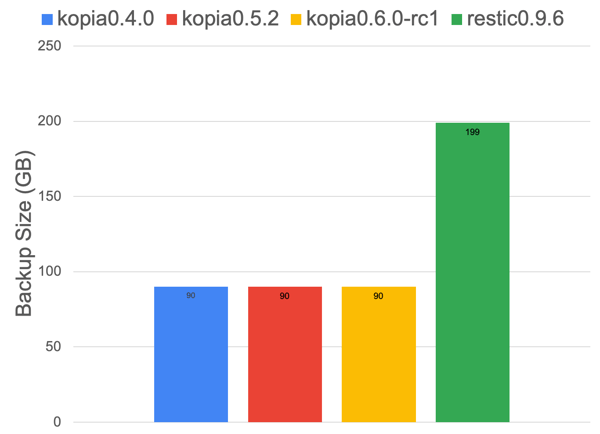 When compared to restic, we notice that restic not only takes 7X longer than the most recent kopia version, it doesn’t reduce the backup size because it doesn’t support compression. This results in object storage utilization of ~200GiB with restic vs. 90GiB for kopia. 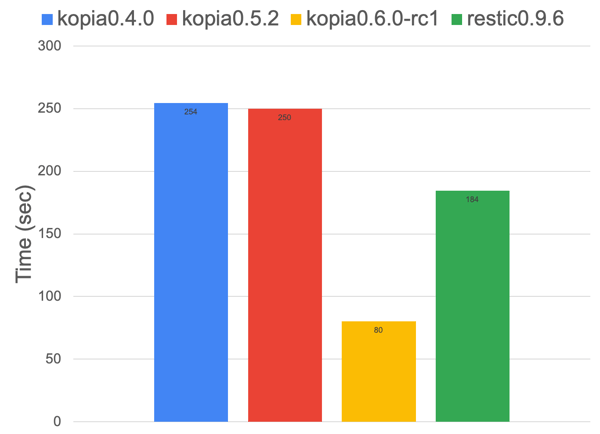 The small files workload is a pathological one as we have a large number (2M) of files with very little data (1KiB each, 1.9 GiB total) that won’t benefit from either compression or deduplication. The amount of metadata, relative to data, will also be high here.

As the graphs show, kopia’s performance has improved significantly during the last development cycle with an ~70% reduction in total run time. The changes responsible for this improvement include better memory management, reduced contention of key data structures and aggressive parallelization. Restic, while better than previous kopia releases, takes 2.3X longer than the upcoming kopia release for this benchmark. 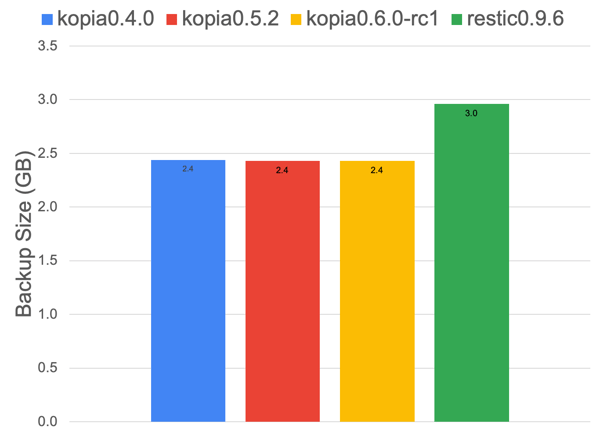 Kopia’s backup footprint is the same across releases, and it is 20% smaller than Restic’s. This can be attributed to better object packing. Kopia uses efficient index on-disk structures that allow quick writes and lookups while remaining very compact.

Get Started With Kopia and K10

Kopia today has a lot more to offer than what this blog post could even start to cover. We highly encourage you to download it and take it for a spin, join the Slack channel (don’t forget to say hi to Jarek, the lead developer behind the project), and become a part of the community. If you are looking for Kubernetes backup in particular, don’t forget to download and deploy our forever-free K10 starter edition today.

Why You Should Read Kubernetes Backup & Recovery For Dummies 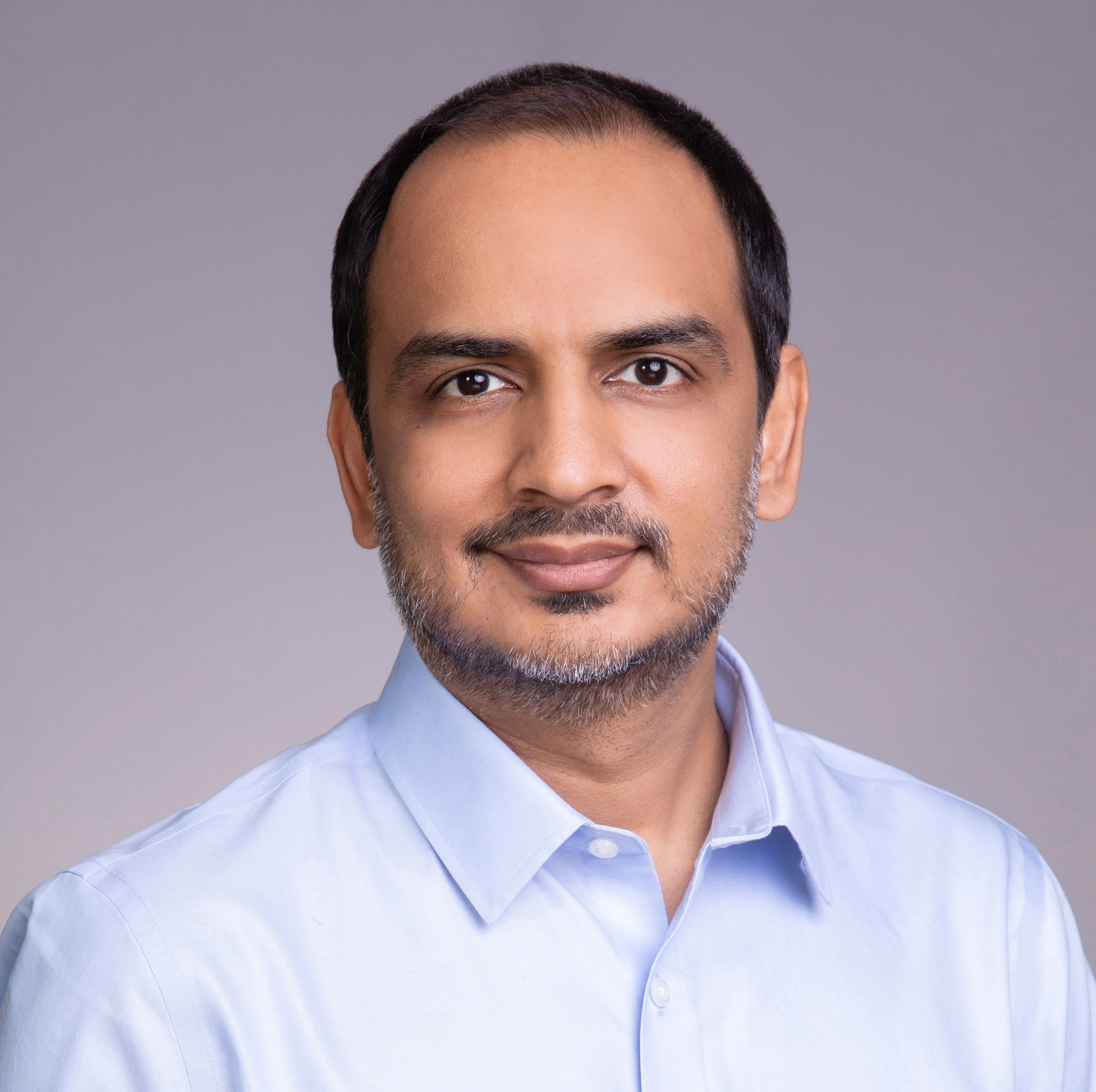